Meyer Turku Shipyard has handed over the Costa Toscana luxury cruise ship to its customer Costa Cruises. Steel surface coatings were supplied by Nor-Maali Oy together with Jotun. The products used were e.g. Jotamastic 90, Hardtop AX, Chemflake Special and Baltoflake.

Meyer Turku Shipyard handed over the Costa Toscana luxury cruise ship to its customer Costa Cruises in December. Despite the COVID-19, the ship was completed on time.

Costa Toscana is the second cruise ship ordered from Meyer Turku by Costa Cruises. The Costa Smeralda, a sister ship of the same size, was completed in 2019. Costa Toscana heads to the Mediterranean, from where the first cruise is scheduled to begin in early March. The luxury cruise ship will operate year-round in the western Mediterranean. 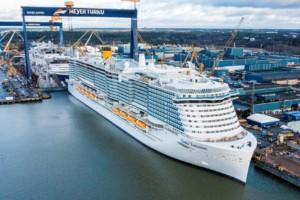 Costa Toscana uses a number of technologies to reduce its environmental impact. The ship uses LNG as fuel, which doesn´t emit sulfur dioxide or fine particulate emissions. Nitrogen oxide and carbon dioxide emissions will also be significantly reduced. Energy consumption is minimized by the design of the ship’s shapes and the energy efficiency system.

Daily water demand is desalinated from seawater. Of the ship’s waste, all recyclable materials (eg. plastic, paper, glass and aluminum) are recycled afterwards.

This new luxury cruiser is a tribute to the province of Tuscany, which is reflected in the name of the ship and the interior of the public areas. The ship has a spa, themed bars, 21 restaurants and entertainment areas. The cruise cabins also showcase the Italian style.

Coatings for steel surfaces on the ship were supplied by Nor-Maali Oy together with Jotun, which is one of the world’s largest manufacturers of marine coatings. Construction of the ship began in the summer of 2019 and the construction method was the yard’s own block production combined with the block production as subcontracting from partners. Nor-Maali Oy delivered coatings and provided technical support to several countries.

Costa Toscana´s steel surfaces have been coated with premium products such as the epoxy mastic coating Jotamastic 90 and the aliphatic acrylic polyurethane topcoat Hardtop AX. These products were used in several areas across the ship. At some sites, Jotamastic 90 was used as a single coat.

In addition to the main products, other products were used for special areas. For example, the chemical resistant glass flake reinforced vinyl ester coating Chemflake Special was used in bioreactor, waste water mixing and bio sludge tanks. The product is specially recommended for areas subject to extreme chemical exposure and mechanical wear and where future maintenance is challenging. In the case of bioreactor, waste water mixing and bio sludge tanks in Costa Toscana, Chemflake Special protects structures from very aggressive environmental conditions when the waste forms e.g. hydrogen sulfide and free fatty acids.

The ship’s decks in service corridor and outside provision store were coated with glass flake reinforced Baltoflake, an unsaturated polyester coating. The cruiser’s service corridors and storage facilities are exposed to constant truck and pump cart traffic, so a coating that can withstand very severe mechanical stress is needed for the floor. Baltoflake is recommended for areas subject to extreme mechanical wear and harsh exposure conditions and where future maintenance is challenging (e.g. offshore zones and buried tanks). 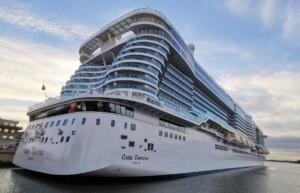 An important part of the painting work on the steel surfaces of the cruise ship is the technical support and inspection work provided by the paint supplier. The inspection work ensures, in cooperation with other parties, that the agreed quality objectives are achieved. Coating Advisor Sara Grundsten-Lyapova works as Nor-Maali Oy’s inspector and advisor at Meyer Turku shipyard.

In the case of Costa Toscana, the inspection work took more than two years. Surface treatment began as soon as the first block was built and continued until the ship was completed. Thousands of inspections were carried out during the construction of the ship.

With new construction, the surfaces to be painted will be inspected several times during the painting work. The first inspection is performed on the pre-treated surface. The degree of pre-treatment must be in accordance with the specification and the surface must be dust-free and clean. The surface quality is compared to the standard and it is decided whether it passes the quality requirement. If the pre-treated surface passes the inspection, the painting work can begin.

The painted surface is inspected after each painting. Film thicknesses are measured and the surface is also visually inspected. Things to consider include smoothness of the film, possible saggings and dry dust deposited on the surface. Inspections usually involve representatives from the shipping company, the shipyard, the paint supplier and the contractor. All inspection results are documented and the surfaces are photographed.

In addition to inspection work, Sara’s job description also includes providing technical support. Almost daily, she discusses with both the contractor and the shipyard staff about issues related to the products and environmental conditions. In addition, if necessary, she will obtain further information on emerging topics from Nor-Maali’s technical service or Jotun. 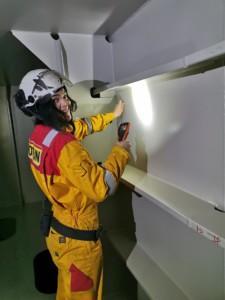 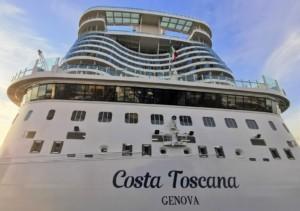 28/4/2022 M/S Arkadia was maintenance painted with Jotun products at the end of December. The drydocking lasted ten days, during which time the ship´s cargo holds and hull got new, durable paint surfaces. The products used were Jotaguard 660, Jotamastic 90 GF, Jotaprime 500 and Hardtop XP.

Does your project require an SSG approved paint system? Nor-Maali’s SSG paint systems are now available to you.

14/3/2022 Kurikan Hykoteam Oy manufactures work equipment and machinery for the needs of agriculture, property maintenance, landscaping and contracting. Usually their products are painted with solvent-based coatings. When Hykoteam was offered the opportunity to test the water-borne Normadur Aqua DTM polyurethane coating, they were immediately ready for testing this more sustainable coating.

24/2/2022 Nor-Maali's high solids epoxy primer NorECOat HS Primer is an ideal coating to enhance efficiency and sustainability in your painting process. With Nor-Maali’s NorECOat HS you can paint objects requested to have corrosivity category/durability range up to Im1 and lm2 very high.

3/2/2022 Helsinki Shipyard handed over the SH Minerva expedition cruise ship to its customer Swan Hellenic in December. The vessel will operate across all continents, specializing in polar regions. Steel surface coatings were supplied by Nor-Maali Oy together with Jotun. Products used were e.g. Marathon IQ2, SeaQuantum Classic S and Tankguard DW.