M/S Arkadia was maintenance painted with Jotun products at the end of December. The drydocking lasted ten days, during which time the ship´s cargo holds and hull got new, durable paint surfaces. The products used were Jotaguard 660, Jotamastic 90 GF, Jotaprime 500 and Hardtop XP.

M/S Arkadia is a bulk carrier owned by ESL Shipping and built in 2012 at Hyundai-Vinash shipyard in Vietnam. Paint surfaces in cargo holds and hull are subjected to heavy stress as the ship carries bulk cargo in ice areas. M/S Arkadia requires maintenance painting at regular intervals.

Maintenance painting of M/S Arkadia was carried out at the Besiktas shipyard in Turkey at the end of December. The drydocking lasted ten days, during which time the ship´s cargo holds and hull were pre-treated and painted.  The maintenance painting was performed with Jotun products, some of which were supplied by Jotun Turkey and some by Nor-Maali.

Prior to painting, cargo hold surfaces were high-pressure washed (350 bar) to remove water soluble impurities and then sand/grit blasted to Sa2. Painting was done with Jotaguard 660. After stripe coat two full coats of Jotaguard 660 were applied.

Jotaguard 660 is a polyamine cured epoxy coating. It is specially engineered for cargo holds and has very good abrasion and corrosion resistance against angular and hard cargoes. It can be used under different climatic conditions and temperatures from -5°C up to 40°C.

The quick curing of Jotaguard 660 makes it suitable for short waiting time before taking first cargo and its hard, smooth surface eases cleaning between cargo shifts. Certificates include grain certificates and FDA approval. 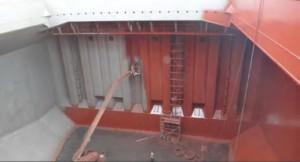 Maintenance painting of the hull area included the treatment of flatbottom (4723 m2), sidebottom (5490 m2) and topside (2180 m2). The hull area paintings were mainly done as touch up, only the topcoat on topside was painted as full coat.

Prior to painting, hull area was high-pressure washed (min. 340 bar) to remove water soluble impurities. Damaged areas were then sand/grit blasted. The products used in the hull were Jotamastic 90 GF WG, Jotaprime 500 and Hardtop XP. In addition, sea chests were coated with Safeguard Universal ES and Seaforce 60 M.

Flat- and sidebottoms were painted with Jotamastic 90 GF WG, a polyamine-cured epoxy mastic coating. It is reinforced with glass flakes for improved abrasion and scratch resistance.  Winter grade (WG) can be applied at sub-zero surface temperatures.

Jotaprime 500 was used as a primer on the topside. The product is an abrasion resistant, fast-drying polyamine-cured epoxy coating. Jotaprime 500 can be used as an all year newbuilding and repair coating. The main advantages of the product are a fast coating cycle, low temperature curing and good painting properties.

Topcoat used on the topside was Hardtop XP, an aliphatic acrylic polyurethane coating. Colour and gloss retention properties of the product are very good, so it suited as a topcoat on topside. Hardtop XP has excellent spraying properties due to optimized rheology. Forming of dry spray is minimal during the spraying. 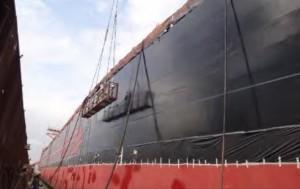 ESL Shipping is the leading carrier of dry bulk cargoes in the Baltic Sea region. ESL Shipping’s competitive edge is based on its ability to secure product and raw material transportation for industries and energy production all year around, even in difficult weather conditions. ESL Shipping Ltd is a subsidiary of Aspo Plc.

ESL Shipping started its operations in 1949. The founding of the shipping company was one of the first examples of Aspo’s ability to expand into new fields of business. As Aspo imported substantial amounts of coal and coke, it felt that operating its own ship would make financial sense. Soon, Aspo also offered reliable transport services to other customers.

At the end of August 2018, ESL Shipping completed the acquisition of Swedish shipping company AtoB@C Shipping. The combined fleet of ESL Shipping and AtoB@C Shipping consists of 48 vessels with cargo capacity ranging from 3,000 to 56,000 dwt with total deadweight capacity of 456,000 tons. The third unit of the group, Norra Skeppningsgruppen (NSG) provides ship agency and related services from its offices in Norrköping and Oxelösund.

Experienced crew on board and personnel ashore together with the versatile fleet built for the demanding conditions of the Baltic Sea guarantees our customers quality of service they can rely on in all conditions. Ice-strengthened fleet can safely call at most of shallow drafted ports in the Baltic Region. All ships have cranes on board which enables independent cargo handling both at ports and at open sea. 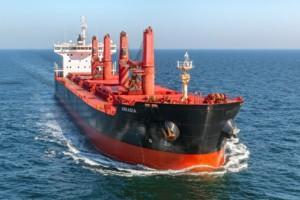 A similar maintenance painting will be applied to M/S Arkadia’s sister ship M/S Kumpula in week 21.

Does your project require an SSG approved paint system? Nor-Maali’s SSG paint systems are now available to you.

14/3/2022 Kurikan Hykoteam Oy manufactures work equipment and machinery for the needs of agriculture, property maintenance, landscaping and contracting. Usually their products are painted with solvent-based coatings. When Hykoteam was offered the opportunity to test the water-borne Normadur Aqua DTM polyurethane coating, they were immediately ready for testing this more sustainable coating.

24/2/2022 Nor-Maali's high solids epoxy primer NorECOat HS Primer is an ideal coating to enhance efficiency and sustainability in your painting process. With Nor-Maali’s NorECOat HS you can paint objects requested to have corrosivity category/durability range up to Im1 and lm2 very high.

3/2/2022 Helsinki Shipyard handed over the SH Minerva expedition cruise ship to its customer Swan Hellenic in December. The vessel will operate across all continents, specializing in polar regions. Steel surface coatings were supplied by Nor-Maali Oy together with Jotun. Products used were e.g. Marathon IQ2, SeaQuantum Classic S and Tankguard DW.

28/1/2022 Meyer Turku Shipyard has handed over the Costa Toscana luxury cruise ship to its customer Costa Cruises. Steel surface coatings were supplied by Nor-Maali Oy together with Jotun. The products used were e.g. Jotamastic 90, Hardtop AX, Chemflake Special and Baltoflake.