When painting with Nor-Maali´s water-borne coatings, for example Normadur Aqua DTM, stable conditions ensure a robust and a premium film. Besides the environment conditions, such as humidity and temperature, there are several practical tips to be kept in mind, says Miika Bergdahl, Nor-Maali’s test painter. Read here below more of Miika and his tips for applying Normadur Aqua DTM.

Miika has worked in spray painting for 25 years, and he has comprehensive experience in industrial paints and coatings as a painter at ACE/OEM company. Miika joined Nor-Maali   in the fall 2018. 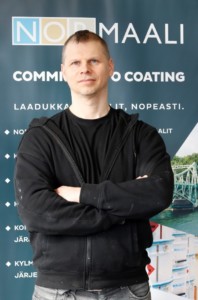 As part of R&D and technical service

After starting to work in Nor-Maali, Miika’s view of industrial coatings and the factors influencing the “fit and use” have broadened considerably. In order for a customer to have a functioning product, considerable amount of R&D and testing shall be done – one crucial part is test painting.  In Nor-Maali’s R&D work, cooperation between the chemist and the test painter, plays an important role. The best result is thought and tested together.

In addition to the R&D work Miika’s other tasks include e.g. painting of test plates for various needs (e.g. for Silko and SSG standard test), daily quality control paintings, spraying of sample plates.

Most of the painting is done with an airless spray, sometimes the work also includes air-assisted gravity feed spraying, and brushing as well as rolling. Usually the surface to be painted is sandblasted steel, but sometimes paintings are made e.g. for smooth steel and galvanized and aluminum surfaces.

Miika says that his current job differs significantly from his previous job in the industry. In the work of a test painter, spraying must be done really accurately. There cannot be any variation in film thickness, as usually the painted plate goes to some test. In Nor-Maali, Miika mainly paints small test plates, while in the previous job he painted large machinery components.

In his free time, Miika builds scale models. He also needs painting skills in his hobby, as an important part of making scale models is painting them with a pencil spray gun and brush. 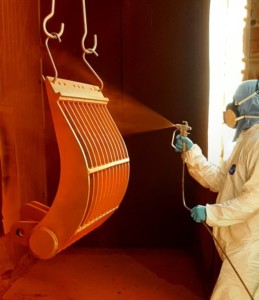 8/4/2021 We offer the Finnish and Baltic markets corrosion protection coating systems for offshore structures. These systems have been designed in accordance with the NORSOK M-501 standard and implemented with Jotun products. Jotun has several tested and pre-approved systems with coatings that have produced excellent results.

Growth in Russia – large network to service you fast

12/2/2021 Year 2020 for Nor-Maali in Russia was year of growth and geographical expansion. Sales under Nor-Maali brand name increased over 25% comparing to previous year. A number of new representatives started to sell Nor-Maali´s products across Russia.