Both water-based and solvent-borne coatings contain the same five main chemical component categories: binder, additives, fillers, colouring pigments and solvents. In water-borne coatings the solvent is water. The fundamental difference between solvent-based and water-borne coatings comes from the binder. A part of the binders for water-borne systems are not share stable. This means in practise, that grinding of the pigments and fillers needs to be done into the water first. Then, the binder itself is added in the final let down stage of the production along with rest of the ingredients. In terms of R&D this means, that the manufacturing scale aspects, including the right equipment, plays a crucial role already in the early stages of R&D process.

Further besides the compatibility of different chemical components the adding order of ingredients in water-borne coatings is also much more important than with solvent-based counterparts.  Additionally the intended substrate for the coating (e.g. steel, concrete etc.) creates specific requirements for the design of the coating, among other things the control of the pH has a significant role in this part.

“Finding the right raw material combination and raw material addition order into the coating is crucial. Also with ready-made paint storage and application conditions have to be better evaluated”, R&D chemist Lena Ammosova tells. “At the same time this all makes it even more interesting”, she continues. “And with water-borne coatings it is nice that I´m able to create solutions that are safer for the user and the environment.” 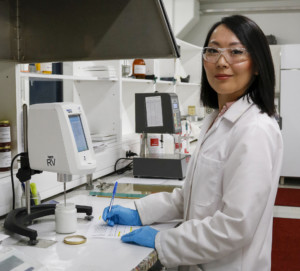 Development of a new coating starts usually with a search of raw materials, sometimes with a search of new technology. Collaboration with raw material suppliers plays an important role. When the possible resin candidates have been found, creation of first version of coating formula begins. Existing raw materials are the first choice to be utilized in the formula, so that raw material load in the warehouse can be kept smaller and we can secure flexible supply to customers. Finding the right formula takes time and requires testing a lot of different raw materials and their combinations – dozens or hundreds of tests in laboratory scale dissolver – just one litre batches.

After the basic formula is found and the coating meets the requirements of the standard tests, the work continues with fine tuning of the properties. Besides laboratory scale, the coating formulation must also function in the production scale. “As a part of our journey towards more sustainable solutions we have this year continued our investments to new production equipment at our Lahti facility. Together with our experienced production team we have been able to scale up Norepox Aqua DTM production quickly”, says R&D Manager Mika Perälä.

Lena joined Nor-Maali’s R&D team 1.5 years ago and took the lead of our Norepox Aqua DTM development. Before Nor-Maali´s R&D team, Lena worked as a postdoctoral researcher at the University of Eastern Finland, where she also completed her doctoral studies in the field of Physical chemistry and developed functional surfaces.

Nor-Maali’s 1st generation of water-borne industrial coatings were introduced back in 1997, a primer and topcoat for indoor areas in ships. Already then it was clear that the demand for more environmentally friendly products was rising. However, the available resin and binder technologies were not yet on the market to meet the requirements of higher corrosion classes.

Today’s water-borne coating technologies are able to challenge the traditional industrial solvent-based coatings. “In our testing Norepox Aqua DTM has shown to have an excellent corrosion resistance. It goes to corrosivity category C3-M with 120 µm DFT. At the moment we are testing Norepox Aqua DTM with lower film thicknesses as a direct-to-metal coating and in different paint systems for higher corrosivity categories”, Lena tells. In comparison tests with solvent-based epoxy counterparts, Norepox Aqua DTM reaches the same level in performance.

“With water-borne products, tests and testing protocols are the same as with solvent-based products. Tests to be performed include e.g. basic corrosion test with condensation, salt spray and pull-off tests, over-coating tests and drying time tests to name a few. There are quite a lot of different tests that need to be performed, with acceptable results!” Lena tells. “If results are not good enough, coating formulation needs to be improved…and then the testing starts again. Some tests take several weeks or even months, so development work takes time.” 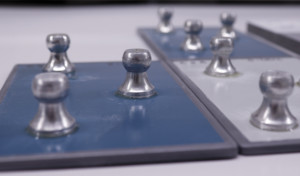 Testing at the customer

After the laboratory testing, functionality of the product is also tested at customers in real conditions. It doesn´t help if the product works in the laboratory, but not in the paint shops. “It has been interesting to visit our customers for a paint test to see what kind of conditions they are actually working on. It helps me develop better coatings, when I understand the industry and conditions better”, Lena says. 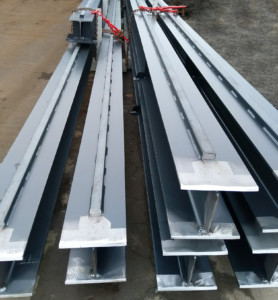 Facts behind the surface

Further information from our sales team.

12/9/2022 By choosing a water-borne product the painting process becomes both more environmentally friendlierand safer for the user.

”Can you paint in the cold?” – Saving heat in industrial paint shops

7/9/2022 The energy crisis has brought up questions about saving heat in paint shops. The prices of electricity, gas, oil, pellets, etc. heat sources have increased significantly and availability has also fallen. Can the temperature be lowered in paint shops? What should be considered in painting process? Juhani Korajoki from Nor-Maali's Technical Service tells how colder painting conditions affect to the production process and what shall be taken into account.

1/9/2022 Färg-In Skellefteå and Leksands Industrifärg (LIFAB) have joined Nor-Maali´s Swedish dealer network as the newest members. As a result of this cooperation, Nor-Maali´s industrial coatings are now available in Sweden from ten dealers.