Nor-Maali Oy’s subsidiary Oü Nor-Maali was established in 2015 to serve the Baltic market. Through its subsidiary, Nor-Maali wants to ensure fast and flexible service in this market. An important part of the operation is listening to customers, technical support and practical advice. Oü Nor-Maali’s product range includes Nor-Maali’s own products, but also Jotun’s protective and marine coatings, which the company sells in Estonia and to distributors in Latvia and Lithuania.

The company has a warehouse on its premises, which covers a wide range of Nor-Maali and Jotun products. The stock is replenished from Lahti 2-3 times a week. In addition to this, some direct deliveries are dispatched from Lahti to customers in the Baltics. 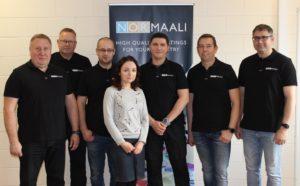 Oü Nor-Maali’s managing director is Rainar Jurisaar. His career with paints began in 1997 with Jotun’s distributor. After this, Rainar was employed by Jotun. Nor-Maali became acquainted with Rainar after he worked for Nor-Maali’s former dealer. When Oü Nor-Maali founded in 2015, Rainar was hired managing director of the company. Rainar lives cohabiting and has one adult son. His hobbies are a newly bought puppy as well as a gym. 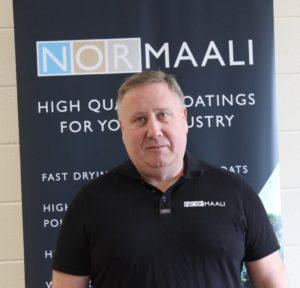 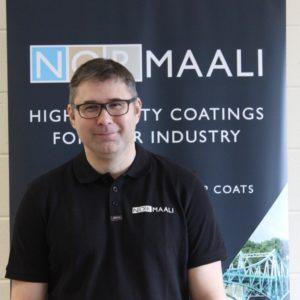 Wiking Kalmokov started working in the paint industry in 2007 as a warehousekeeper for our dealer. In 2010, he began training a sales representative for the company. In 2014, Wiking expanded his area of ​​expertise by completing the Frosio certificate. Wiking now works as a sales manager in central Estonia and as an inspector for projects in the industrial and marine segments. His family includes a wife and three children and as a hobby he is renovating a newly bought cottage.

Nor-Maali’s distributor network covers the Baltic countries. In addition to Oü Nor-Maal, the Baltic dealers are SIA Latfintex and SIA Industrial Coatings in Latvia and UAB Alindra in Lithuania.

3/12/2020 Nor-Maali is once again expanding its operations and Nor-Maali´s coating solutions are now more extensively available in Sweden. Nor-Maali´s industrial coatings are already available from seven dealers. We are pleased to announce two new members to our dealer network: Färg & Bygg i Malmö AB in Malmö and Syntema i Arbrå AB in Arbrå.

30/10/2020 Nor-Maali is improving its sales network in Sweden and has opened its own warehouse in Stockholm. The aim of the warehouse in Sweden is to improve the level of service and the delivery speed for the needs of local customers and distributors.

30/10/2020 Nor-Maali has launched Russian-language website to serve a growing Russian customer base.

Rikon A/S supplies harbor crane to the port of Marseille

28/10/2020 Rikon A/S, a Latvian manufacturer of lifting equipment, supplies a large harbor crane to the port of Marseille. The coating system used in the project was Barrier - Penguard Express ZP - Hardtop AX. Rikon A/S is a customer of our Latvian distributor Latfintex.

9/10/2020 How to achieve the corrosion resistance of epoxies and fine surface properties along with weather resistance of polyurethanes in a single painting system, where the use of isocyanates is not desired? By choosing Norecryl 50, an isocyanate-free acrylic coating.