Nor-Maali´s Coating Advisor Sara Grundsten-Lyapova studied alongside her job and graduated with a degree in construction engineering last December. She wrote her thesis, The Use of Water Based Paints in Industrial Painting and Marine Painting, for Nor-Maali.

Sara has been worked as a Coating Advisor at Nor-Maali since January 2020. She works mainly at the Meyer shipyard in Turku, where she provides technical support for the luxury cruise ships being built there. Her main task in technical support is to help the customer achieve the set quality requirements. Achieving the goal can be e.g. training of painters, measurement of paint film thicknesses or inspection of pre-treatment. Sara previously worked as an industrial painter, but then she started to work as a coating advisor, first with a contractor and later in the Technical Service of Nor-Maali.

Sara wanted to develop her professional skills and started to study alongside her job. After couple years of hard work, she graduated as a construction engineer from Turku University of Applied Sciences in December 2021. Sara is planning to to continue in Master´s Programme in industrial engineering and management. “I want to continue my studies as I believe that a higher level education is a critical factor in career advancement. In addition to keep my professional skills up to date, learning new also advances my ability to look things from multiple perspectives”, says Sara. 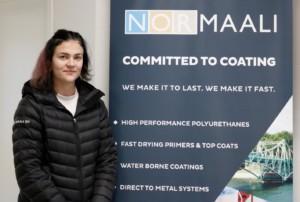 The use of water-borne coatings in industrial and marine painting

Sara’s thesis is titled “The Use of Water Based Paints in Industrial Painting and Marine Painting”. The aim of the thesis was to create a comprehensive information package for the user about the general and special features of this topic, which, taking into account the reader, can develop their own activities in an increasingly environmentally friendly direction.

The thesis was divided into two different parts, the theoretical and experimental parts. The theoretical part focused on on water-borne industrial coatings, first in general, then Nor-Maali’s own products. In addition, the thesis examined the storage and transport of products, painting facilities and equipment, and the recycling of waste from the use of water-borne coatings.

In the theoretical part, the differences between water-borne and solvent-based products, for example in terms of health and the environment, and in practical painting work were reviewed. If the user is planning to switch from solvent-based coatings to water-borne products, this comprehensive information package on water-borne coatings and their use and required conditions can facilitate the decision-making process.

Determining the environmental conditions for paint shop and drying facilities is very important, as painting work may fail under unsuitable conditions. The technical properties of the coating can also be impaired.

Table 2. Effect of temperature and relative humidity on the drying time of Akvanor 100 SG.

The drying time of the Normadur Aqua DTM was tested in an air-conditioned paint chamber with three different amount of airflow: 7,500 m3/h, 4,860 m3/h and 1,116 m3/h. The temperature in the painting room was 23 °C. Increasing the airflow did not significantly accelerate the drying, with the maximum ventilation the coating dried in eight hours and when the ventilation was reduced it took more than 12 hours to dry.

Table 4. Effect of temperature and relative humidity on the drying time of Normadur Aqua DTM.

Table 6. Effect of temperature and relative humidity on the drying time of Norepox Aqua DTM.

It is recommended to bring the painted part to room temperature after 1 to 4 hours, depending on the drying temperature, in which case the coating hardens to dry to handle effectively.

As a result, the importance of the right kind of conditions during both painting and drying was observed in the experimental part.

The parameter that most influenced the final result varied according to the paint type. Based on the results, it makes sense for companies that use water-borne coatings to invest in painting facilities where the amount of airflow, temperature, and relative humidity can be controlled.

Some of the information obtained from the thesis was added to the technical data sheets. In addition, separate Application Guides were created for the products, which provide more detailed information on the use of the product compared to TDS.

Link to  Sara’s thesis “The Use of Water Based Paints in Industrial Painting and Marine Painting”: https://www.theseus.fi/handle/10024/512636 (in Finnish) 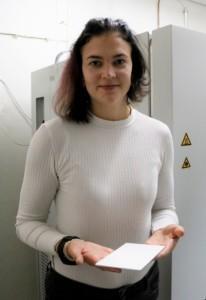 20/6/2022 Chemical legislation on industrial coatings is constantly tightening. This means that new obligatory regulations are required for suppliers and workers - reporting and training. The study of the environmental impact of paint products is still voluntary, but makes the company´s business more sustainable. Sirutiina Hakulinen, Nor-Maali's Product Safety Engineer, tells about two current topics: the future diisocyanate training requirement and the EPD.

28/4/2022 M/S Arkadia was maintenance painted with Jotun products at the end of December. The drydocking lasted ten days, during which time the ship´s cargo holds and hull got new, durable paint surfaces. The products used were Jotaguard 660, Jotamastic 90 GF, Jotaprime 500 and Hardtop XP.

4/4/2022 Nor-Maali is improving its sales network in Sweden and has moved to its own, larger facilities. The aim of new sales office and bigger warehouse is to improve the level of service and the delivery speed for the needs of local customers and distributors. Nor-Maali Group AB´s new sales office and warehouse are located in Enköping, about 70 km west from Stockholm.

Does your project require an SSG approved paint system?

14/3/2022 From Nor-Maali for Finnish and Baltic markets Jotun NORSOK M-501 corrosion protection coating systems for offshore structures. These systems are designed in accordance with the NORSOK M-501 standard and implemented with Jotun products.